As remembered by Kylie West (accuracy not guaranteed)……

The trip to the beautiful Mt Frankland National Park was held over the usual Queen’s birthday long weekend, although with a slight twist as thanks to CHOGM, the day off was Friday instead of the Monday.

As a virgin trip coordinator, I found it a bit nerve-wracking making sure I got all the right information sent out and that people were suitably encouraged and excited by the thought of coming along.  Unfortunately, a real crisis emerged that took my mind off this – the goddamn weather.

One minute it looked promising, the next it looked truly horrific and there were plenty of in-between forecasts.  I harangued a group of people who I knew would be far more capable of making a rational decision about the weather and the future of the trip than me (I call it delegating) and eventually the final call was made to go ahead with the official CAWA trip.

As it turned out, the weather could not have been more perfect.   Which I, of course, took full responsibility for.

The final participant tally was 20, and of these, 19 remembered to bring their shoes and harnesses.  Of the 20 people there, 19 chose to cook their own dinner on Saturday night, with one person electing to “share”.  Out of 20 climbers, 19 wore sensible, respectable climbing attire.

BACK TO THE CLIMBING

A bunch of people had braved the Thursday afternoon mass exodus from Perth and were rewarded for their effort by a good day on Friday.  By the time the rest of us turned up on Friday afternoon or thereabouts, we’d missed a perfect slab-climbing day.   But no mind, because Saturday and Sunday were also glorious and as far as I could tell, everyone was getting on the rock.

There was the usual line-up at routes like Free Burma (160m, 16***), Dream Weaver (95m, 16***) and Purring Pussies (36m, 15**) to access the ledge to continue on with pitches two and three for many routes.  For some, it was good ground for learning multi-pitch climbing as well as leading on slab.  For poor Deb, it was a steep learning curve in a) using bolt plates for the first time and b) experiencing the awful run-out traverse on Lambs to the Slaughter (50m, 14*).  Handled superbly I should point out, with plenty of encouragement from her belayer Martin, who really didn’t want to second it!  Deb’s cool composure was quite a contrast to watching a former CAWA member a few years ago leading the same route, while screaming at the top of her lungs over and over “WHERE’S THE NEXT F*CKING BOLT??!!!” 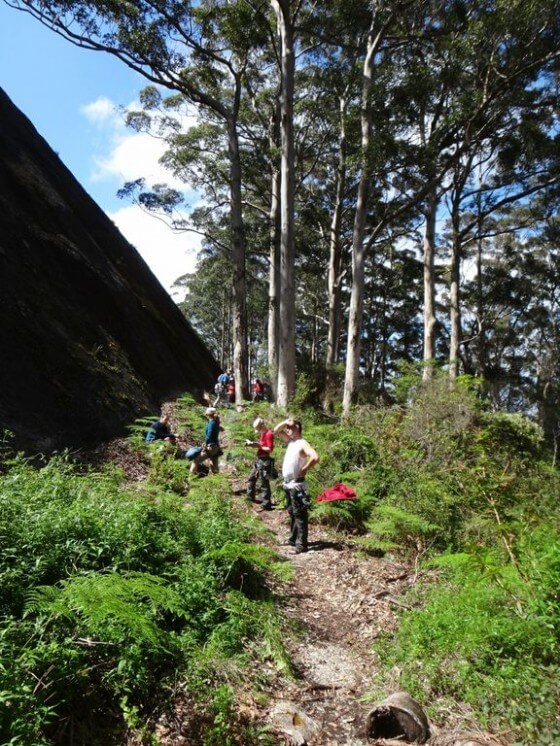 At the start of the day, the serious business of identifying routes and potential climbing partners. [above photo] Some traffic at the top.  Ross, Dena, Steve, Pauline, Wally and Brian (ahem, may I point out the clear blue sky)
Brian “Seagull” Tan, aka Rock Climbing God, had a nice outing on Free Burma with Steve and Pauline, with this being Steve’s first multi-pitch climb. 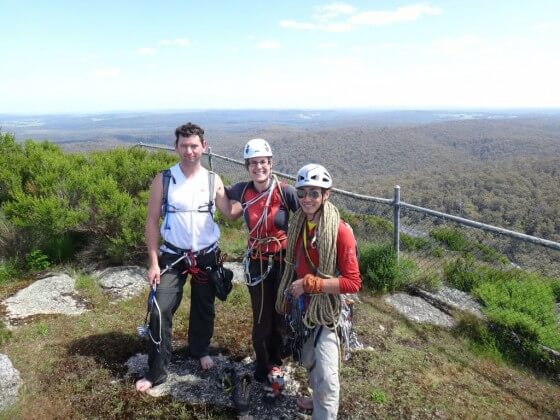 Brian, Pauline and Steve at the top of Free Burma (Steve, about to learn the hard way it's best to leave your helmet on for the summit shot)

Richard and I attempted Stoned Alone (80m, 18**).  We got the first pitch no problem (a stiff 14) but then found ourselves sitting in a puddle with the rest of the route above us dripping wet.  So, after a weird traverse we continued up the rest of Dream Weaver in front of Kelly and Gesa.  Kelly had a lovely time leading the first pitch of Dream Weaver, she was really pleased to be offered the lead and jumped at the chance, didn’t you Kel? 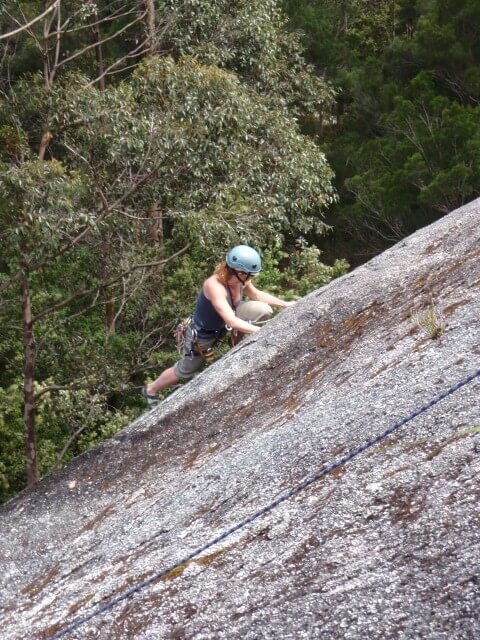 Kelly enthusiastically steaming up the first pitch of Dream Weaver

Dena and Ross went for gold and got many ticks over the weekend, including Hannibal (20), Burmese Tiger (38m, 17*) and Three Sheep Twice a Day (95m, 18**) amongst others.   Eric and Craig had a fine outing on Where Eagles Dare (85m, 18*), although Eric’s attempt to avoid getting mud on his shoes evenutally ended in tears. 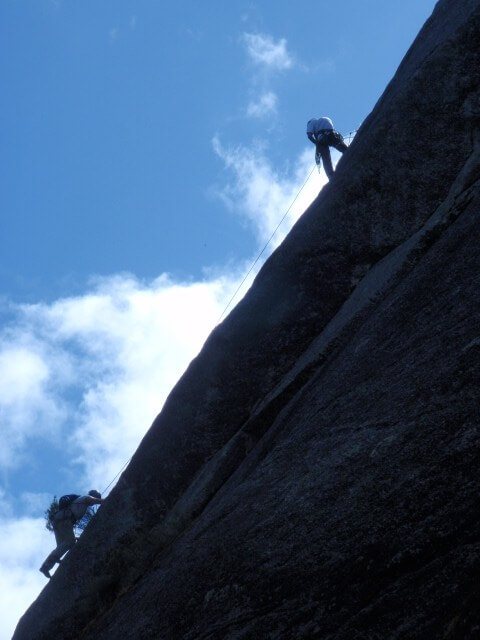 Ross on belay and Dena seconding

Francis had fallen in love with slab climbing and continued let everyone know how much he was enjoying it, particularly when he and Mario were on Purveyors of Matters Large and Small for the Masses (77m, 18*).  Discovering that he had to belay off a single bolt at 45m due to an omission in the route description (just some minor detail of needing two small cams to set up belay at 47m), Mario heard Francis shout from the ground “sorry mate, I’ve lost interest”.   Being the self-described sociable and easy-going fellow that he is, Mario took this news quite well.

One of the quotes of the weekend was from Richard, having just sweat bullets on the first pitch of Saracen – “I haven’t had that much fun since I drove my car into the back of a truck”. 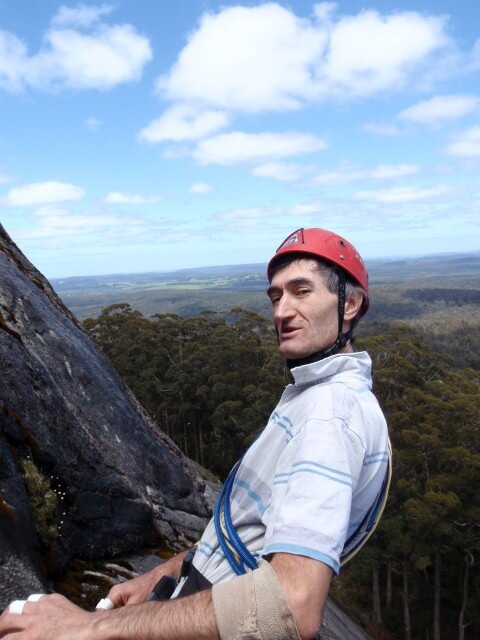 Richard, having not quite as much fun as when he crashed his car

Other notable accents were Brian and Gesa doing Butter Fingers (35m, 20***) from the terrace and Steve, Wally and Jo doing Sheep Two (30m, 15).  Hamish was spotted cruising up Granitarium (85m, 17*) with Lloyd and I had a great time with Mario and Francis (although I felt a bit like the third wheel haha) on Where Eagles Dare. 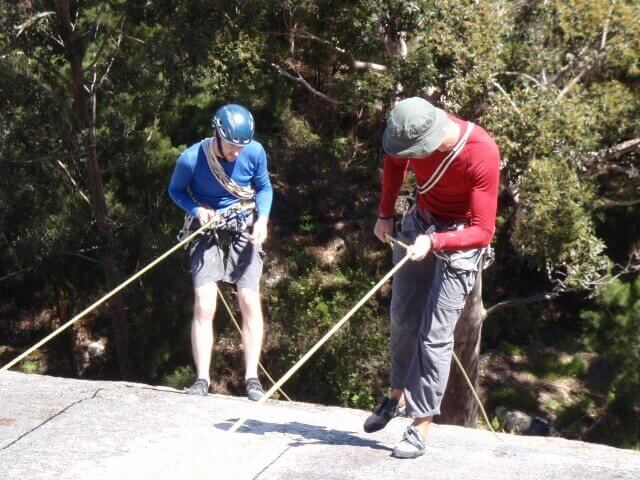 Mario and Francis abseiling off Where Eagles Dare.

I also climbed with Gesa, who led Purring Pussies and then we finished the top two pitches of Free Burma.  I somehow managed to ram four pieces of gear between the first and second bolts on the second pitch.  I felt rather clever and informed Brian that yes, they were all bomber.  He asked “how do you know?  Did you fall on any of them?”  Smart arse. 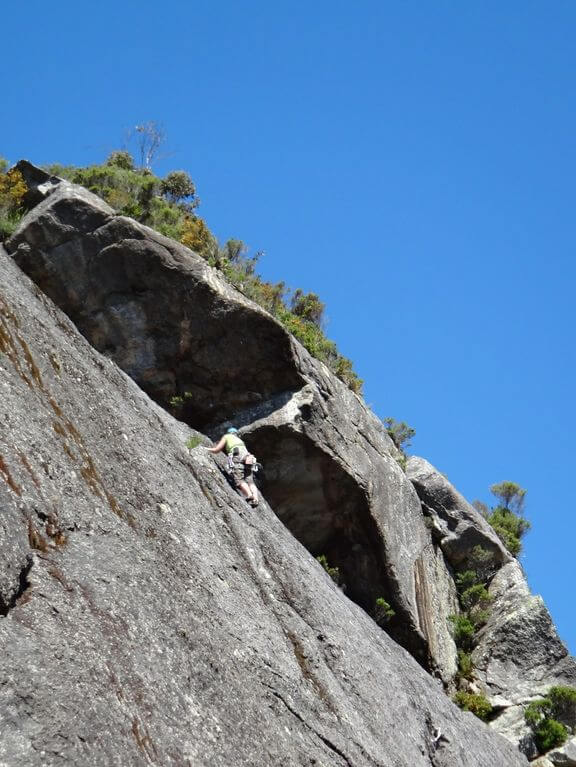 Kylie leading second pitch of Free Burma (16). You can see from here how bomber my gear placements are.....

The evenings were cold but clear and luckily both mossies and march flies were tolerable.  The same could not be said for the bull-ants (or whatever those nasty big red ones are called), with Martin and Richard becoming victims of an attack.  Martin looked like he was Morris dancing and Richard just opted to tear his trousers off.  Different solutions to a painful problem, but equally disturbing! 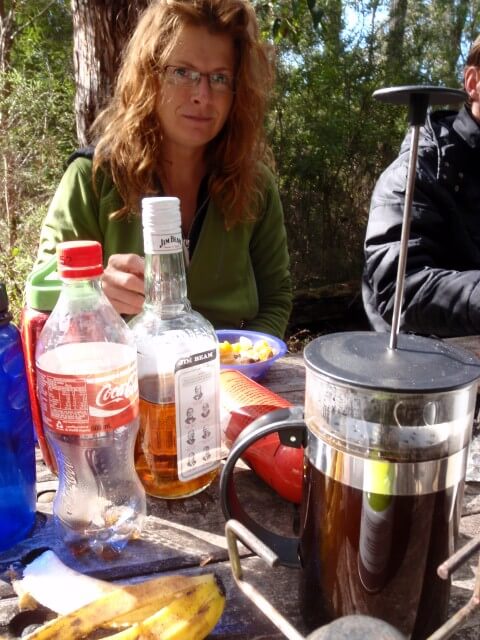 Kelly, about to tuck into a typical Canadian breakfast....

Considering my initial angst, the weather came up trumps and it was a perfect weekend.  The Sunday afternoon saw the gang sprawled out on the gravel of the car park enjoying a picnic, the bums.  What would the tourists think?! 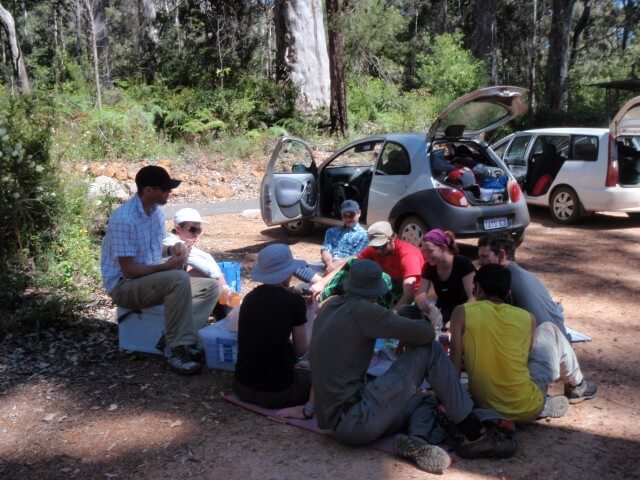 The gang enjoying a picnic in the (car) park Sunday afternoon

Good food (scabbed or otherwise), good company and good climbing.  What more can you ask for?

A final quote from the irrepressible Richard on the Sunday – “How much would one need to pay for such a perfect day?”  The answer is $107.10, which includes camp fees and vehicle depreciation. 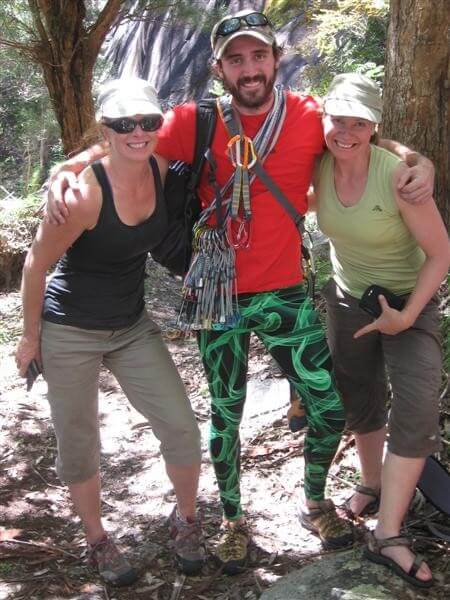 People laughed, but check out the hot chicks Wally pulled in these pants (note that Jo is nowhere to be seen!)