Last Saturday night (15 January) was a beautiful evening for the CAWA film night in Ash and Megan’s backyard. It started with Dena and Megan, barefoot, in the kitchen, and one of them pregnant, preparing food for the soon to arrive hoards of hungry climbers.

I turned up at about 6 pm and starting setting up the projection and sound gear.  Ash had already set up a very professional looking screen.

About 31 people turned up and enjoyed a dinner of gourmet sandwiches, sushi, sausage rolls, spinach and feta rolls, salad, cake and other delights.

Two films were shown, the first a climbing doco made up of a number of short films. We were treated to some quite amazing, and at times, very funny climbing antics. After a short break, we started with the movie. Despite being a rather old film, I think it was enjoyed by everyone as it featured not only some good climbing shots, but also intrigue, car chases, greed and romance (or was it just plain ol’ lust?) and it was very non-PC!

Given the success of this film night, we might we running some more! 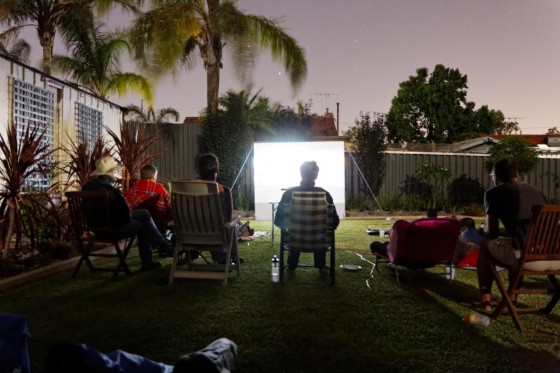