The CAWA Knot Night, held at Rosie O’Grady’s Pub in Northbridge on 15th September 2010, was a rousing success! There was a great turn-out of enthusiastic people keen to expand their repertoire of knots. The experience levels varied widely, but the climbers who had seen their way around a knot or two over the years, kindly shared their shortcuts for some of the ‘trickier’ knots. Learning new ways to twist rope was much more fun than it sounds! While teaching was ‘verboten’, Phil’s handout, with more than a dozen knots plus variations, was quite informative.

Everywhere one looked, there were Munters, clove-hitches and Chi-Fis galore. Phil had roped one of the building’s support pillars so folks could practise using their Munter-hitches and other knots on something solid.

Several new faces were mixed in with the old. I sat near a nice couple who were just getting into climbing, and sensibly came to see how some of the ‘basic’ knots were done. I can say that after learning the right way to tie 2 ropes together, I found a great sense of satisfaction. 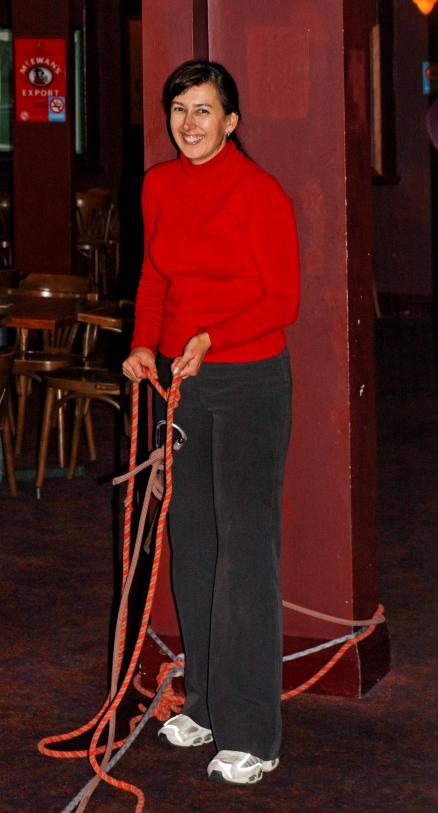 Dena not getting her you-know-what in a knot.