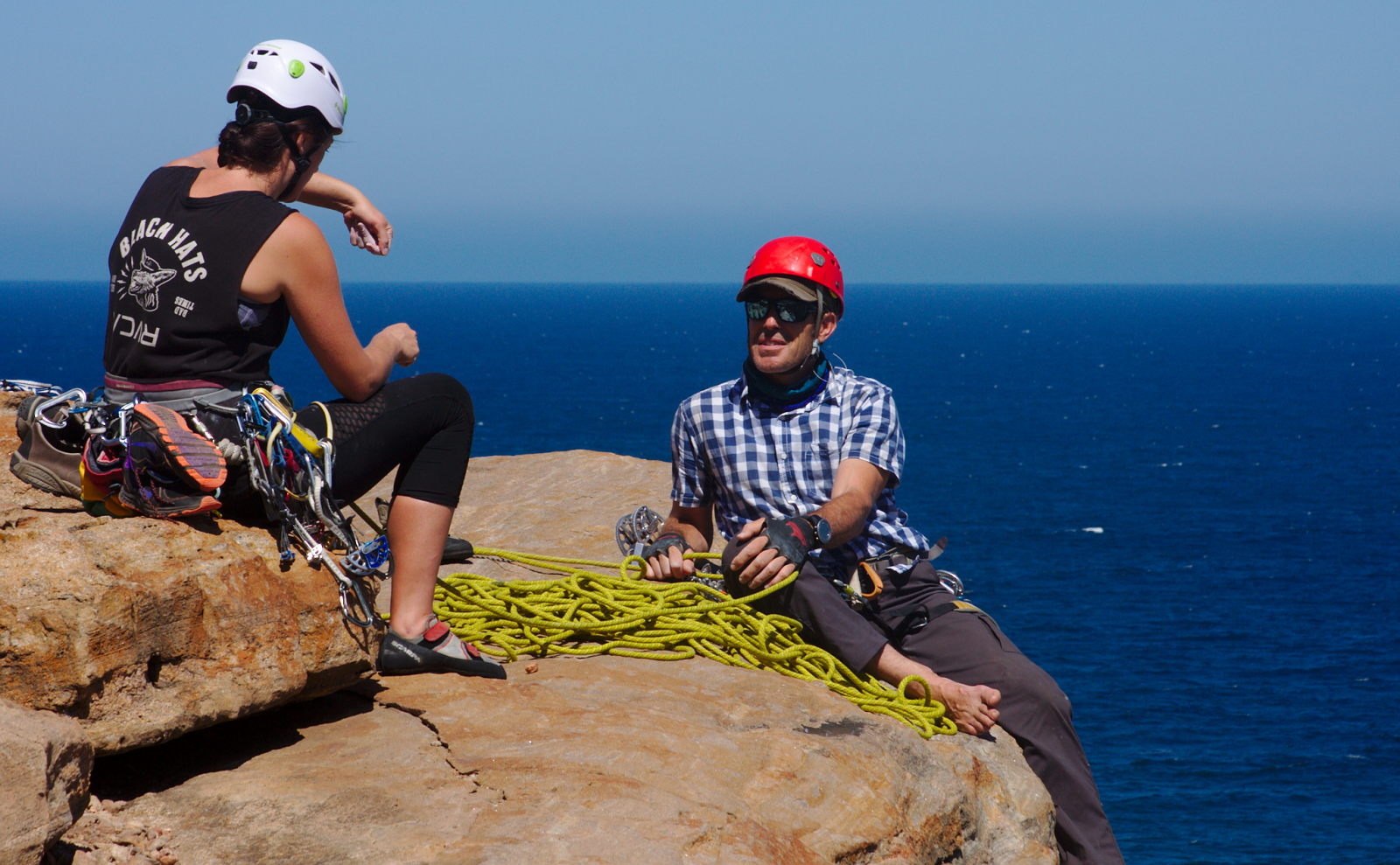 What we did on CAWA trip to Wilyabrup in Jan ’19

The first long weekend of 2019, saw the CAWA members head down to Wilyabrup. Three full days, of climbing trad and sport on three different places on the wall. Many personal challenges were attempted and achieved, a lot of abseiling for the best photo opportunities were taken and new friendships were made.

It started off with the group heading down and setting up camp on Friday. Staying at Gracetown camping grounds. Off to a shaky start of firstly thinking we will not all fit in the campsite, and then Veronika’s losing her girls’, Ariana and Amelie, sleeping bags on the drive down; however, we all banded together and ensured there was enough space for all the tents, vans and had enough sleeping gear for all.

After a leisurely start to the day the group split up into cars and headed to the main Wilyabrup cliff. Jiri set up 4 top ropes spanning a range of grades which kept the climbers occupied for the first half of the day, including “Hope” (14) that Dave used to warm up his trad skills. The group were treated to the sight of a large pod of dolphins cruising the shallows as they commenced their climbs. Following lunch, Jiri and Peter set up some new lines further along the wall with more challenging routes including “Woman Accept It For What It Is” (20) and “Waterfall’s Second Folly Direct Start” (17). Lunch (for those of us who remembered it) was an on-the-go affair whilst looking out to the sea, then more suncream was lathered on and it was time to tackle some routes ranging from 17 to low 20s.

The climbing went well into the late afternoon… There´s nothing quite like the colours of the Wilyabrup cliffs as the day draws to a close. The climbers returned to camp hungry and satisfied with the first day of climbs. A few wines and dinners ranging from instant Indian curries to gourmet homemade meatballs and the group settled in for a night of friendly chatter.

Jiri took the group to the Northern part of the crag, Banana Wall. Here we were met by Lance, who decided to warm up on “Digital Delecti” (**18), which was followed by Veronika (mum), Heidi and others. In the meantime, top anchors were set for “Corpus Delecti” (**18) and “Use No S.L.D.’s” (***19). Both of these climbs were climbed by the group and it was noted at the variety of styles used by each climber to successfully make it to the top. Peter and Andrew warmed up leading the classic on the wall “Banana Split” (**14). Greg and Dave couldn’t resist and gave it a go as well. Young Veronika, who has come over from Slovakia to be with her family, Veronika, Ariana and Amelie, has not climbed much before and attempted “Corpus Delecti” with confidence. She made an impression on the group with her determination to try and work out the climbs and also as an encourager for the other climbers.

After a late lunch, Greg, Dave and Roberta headed around the corner past the Peach Face crag and trad lead “Missing Frog” (16). A simple error, which can be noted as a learning point, was made when Greg was setting up top anchor and Dave was teaching Roberta how to remove tricams from the wall. Greg pulled the whole rope through as Roberta hadn’t tied into the end. Thankfully we were on a very safe place and Greg could either walk out or he was able to throw the rope over for Roberta to tie in. She was successfully able to second the route and remove all of Greg’s gear safely. Dave and Andrew then lead and cleaned the route, which is a big feat as this was Dave’s second lead trad since returning to climbing after a few years.

The end of the day saw Peter and Jir climbing “Dessert” (***25), while the group watched on and encouraged from the bouldering rock (10m away) or at the base. Always good to watch Jiri’s graceful moves linked with his grunts he needs to get past the crux.

Unfortunately, Heidi and both Veronikas with the girls had to leave today and head back to Perth. Day 2 ended with everyone else heading back to camp, to share in the simple camping meals and a bottle of the “top shelf” (Gralyn) red wine and chat until the stars came out.

The last day of the trip became a half day, however, not without its great memories and achievements. When the group arrived in the morning, they split up into their climbing partners and went to different places. Roberta teamed up with Greg. They warmed up on “Hope” (*14 trad), which did have some scary sections as the lower half was greasy with the salt spray and then a slab run-out of 10 m at the top. However, the team flashed it.

Jason ended up trad leading “One for the road” (***18 trad). He was strong until the overhang got the better on him. After putting his trad gear placement to the test (which held successfully and beautifully) with several slips and falls and also capturing the best photos of the day, he decided to head down and let others complete the climb and set up the top anchor. Roberta was then coerced to clean the route. She completed her first outdoor overhang, with the assistance of her top belayer. The moment of completion was celebrated with a range of emotions from shouting at Jason to not take photos, to then laughing at her freak out retrospectively.

Just before heading back to Perth, Greg decided to attempt the same climb “One for the road” on a top rope. He did require 2 attempts to get over the roof over the climb; however, he showed everyone up by carrying a 10kg backpack while doing the climb.

This climbing trip brought together climbers from different climbing groups and also allowed for each one to challenge themselves in where they were at. Not only are these trips valuable for climbing, but also for meeting new people and forming new climbing friendships. This first trip for 2019 was definitely one of those.