This New Year, as on many others, a group of CAWA climbers headed down to Albany to sample the multitude of sea-cliff climbing delights and other delectable treats available in the area. The group took time to gather so it was only a small band of most eager climbers who headed for West Cape Howe early on Monday morning. Kylie led Carousel (15***) with Lou seconding, while Ang led Andromeda (15**), seconded by Blair, and Phil jumped on Wire Flake (16***) with Steve seconding. Later Kylie and Lou moved on to Andromeda while Ang scaled Planar Craving (21). 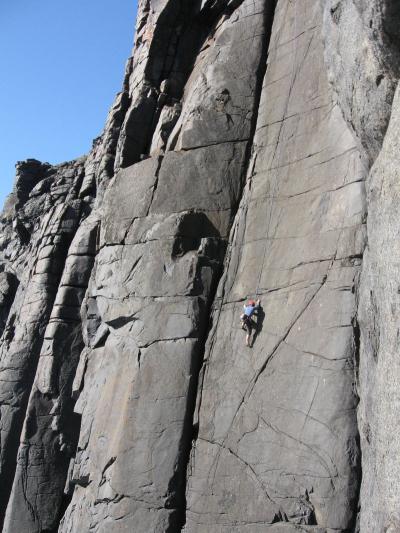 That evening the groups numbers swelled and it was a veritable crowd that made their way to the Gap the next day; a late start due to rain. Fortunately Ross and Dena had arrived the previous night, bringing with them the CAWA rain shelter which was providently erected one minute before the rain started. Everyone huddled under it to enjoy a leisurely breakfast. 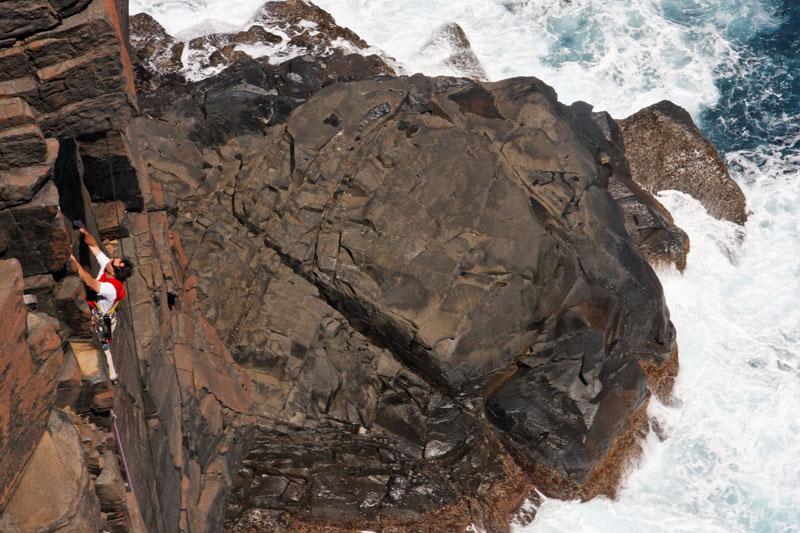 Once the rain cleared up climbing commenced. Providing an additional attraction to the many tourists swarming the top of the Gap and Natural Bridge that afternoon, the majority of the group spent time on the Whales tooth wall, climbing Black Russian (14*) and Whalestooth (15*). Kelly, Kylie, Lou and Conrad climbed Surf’s Up (15***) and some were also persuaded to venture up Over Indulgence (19***), getting in some early prep for New Years Eve.

That evening the group gathered for dinner and Kylie, Ang and Kelly treated us to their version of baseball – using a wine bottle and/or plates as bats and anything to hand as a ball. The saner/sober parts of the group hastily retreated from the pitching zone. Heavy rain and strong winds swept through the camp overnight, prompting Blair and Lou to hurriedly collapse the rain shelter at 2am before it could take off for greener pastures – or land on their tents. The weather failed to significantly improve with daybreak and Wednesday climbing was rained off all along the coast so the majority of climbers took the opportunity to sample the delights of Albany’s coffee houses and shops. Dena and Ross did venture up to the Stirling Ranges where they braved the strong gusty winds and a lengthy uphill approach to climb Nailbite (15) on Talyuberlup. Up for an epic of any sort; Kelly, Blair and Mario decided to hike the Stirling Ridge Walk in one day. Arriving back at camp they wowed us with tales of derring–do, intrepid bush bashing and peaks summited before admitting they had bugged out down the “Loser Track” at 3pm with Bluff Knoll still off in the distance. They may have lost the battle but the war continues with a return engagement planned for March. 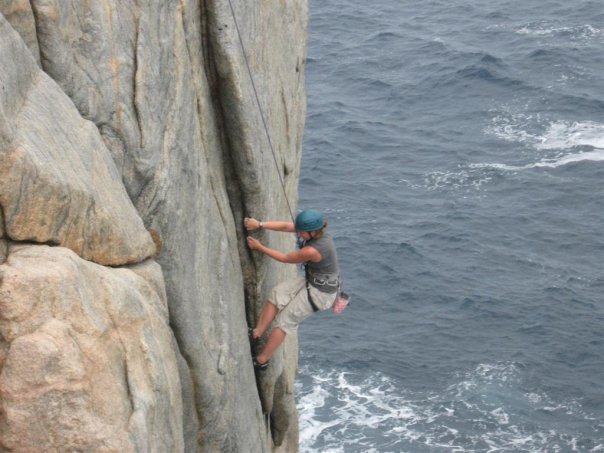 The weather brightened up on Thursday, ready to end the year on a high note, and a large group headed back to the Gap – this time congregating at the Amphitheatre. Phil and Jolene splintered off and met up with Caroline to climb Albatross (15***) at Peak Head. Back at the Amphitheatre Ang, Kylie, Dave and Paul all led Rattle (15) while other’s top-roped Shake (16) and Roll (17). Later Dave, Kylie, Mario and Paul climbed The Red Terror (16) while Ang worked her way up Listen to the Wind Blow (22).

And that brings us to New Years Eve. A democratic vote had crushed the protestors who were lobbying for a visit to the local steak house so it was business as usual at the Golden Town Chinese. Several hours later with their MSG cravings fully sated the group returned to camp with just over an hour left until 2010. It was at this point that Blair chose to introduce everyone to the concept of Picnic Table Bouldering, demonstrating the table-top traverse. A fierce competition ensued with Remi and Phil putting up several new problems for the rest to play on. Remi was declared the eventual winner, scoring an extra grade for the innovative addition of a burning sparkler to the system. Moments later it was midnight and the rest of the sparklers were lit up while Kelly popped the cork on a bottle of bubbly. A few minutes later everyone dispersed to bed, getting ready for an early departure to West Cape Howe. 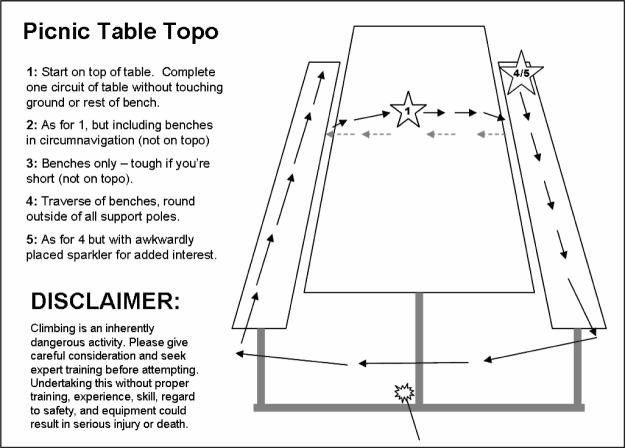 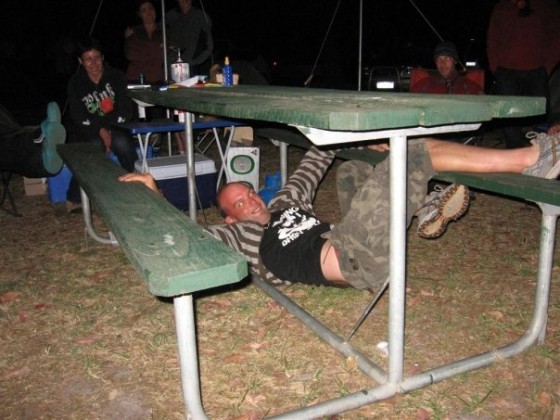 West Cape Howe has to be one of the best places possible to start a new year. To make things even better, this time around there were enough four wheel drives to get everyone in to the crag with minimal effort. Consequently we arrived bright and early and ready to go. Adding extra interest to the day was the start of the 100 climbs in 100 days challenge, initiated by Remi and joined by several others on the trip including Delphine, Mario, Ang and Kylie. This challenge is a fundraiser for Burrup Rock Art preservation and you can track the participants’ progress on: http://www.facebook.com/l/40cf4;www.100in100days.com.au. Friendless (15**) saw some traffic with Remi, Delphine, Kylie, Kelly and Mario all climbing. Ang, Dave, Paul and Lou climbed Carousel and Shitsky Variant (18**). Ross, Dena, Phil, Richard and Jesse headed over to the Raft Area while Blair and Jolene climbed Andromeda. On the way out some four wheel drive drama saw one of the small Suzuki’s reluctant to leave, but fortunately a large crowd of climbers were on hand to ‘encourage’ it to move onwards. 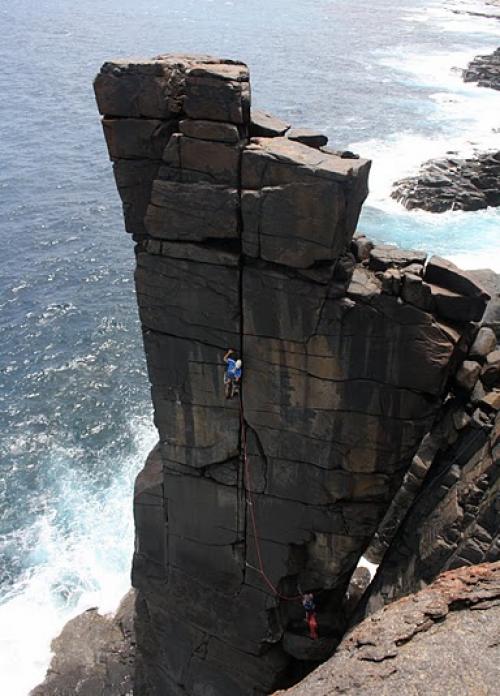 The last weekend of the trip saw small groups climbing at a number of crags. Ross and Dena headed to Peak Head for a first ascent of Ross’s new route Transformer (18 M1). Jolene, Paul, Mario, Blair and Dave headed for the Porongurups with Rehearsing the Fates of Absalom their target. After some intense bush bashing they encountered a mossy slab and a distinct lack of features to aid them in locating the climb. Unwilling to be deterred after the epic approach Jolene began her ascent. Those on the ground watched the air around her turn blue as she dug dirt and moss out of cracks to make way for gear. Discouraged, after one pitch she and Mario returned to the ground and the group retreated. Also wandering around the Porongurups was Phil, who, emerging somewhat later than others from the shower, found himself alone at Gibraltar Rock. Who exactly was to blame for this breakdown in communications remains disputed. All were envious of Kelly, Ang, Richard, Remi and Delphine who’d had a second good day at West Cape Howe.

The return journey to Perth began on Sunday. A few die-hards, and the 100 climbs gang, headed for the Gap to get a few more ticks in. Others chose to enjoy breakfast at the Middleton Beach Café or lunch at the White Star hotel. Standout moments were relived and plans for next year put in place. See you all there.